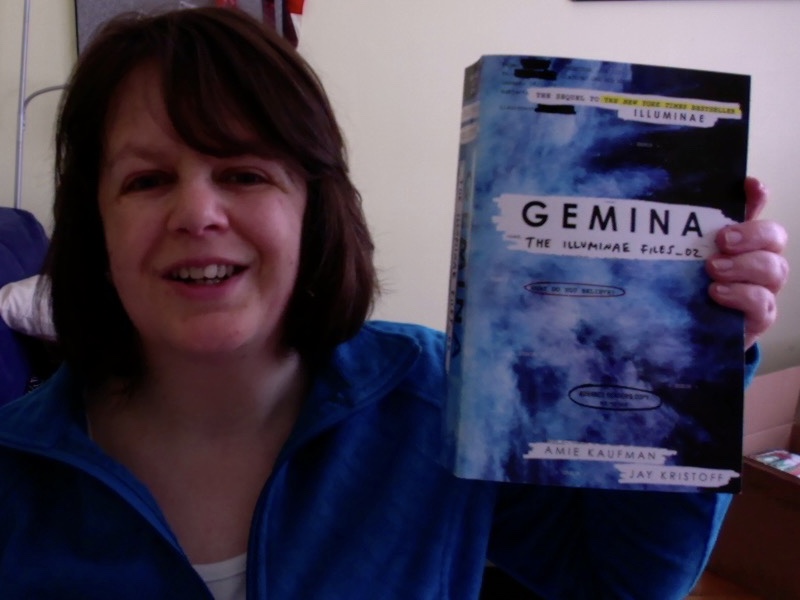 Welcome back to the second part of my BEA 2016 book haul.  There are lots of exciting books still to come!

The first book I’d like to mention is Gemina by Amie Kaufman and Kay Kristoff.  This is the sequel to last year’s awesome YA sci-fi thriller Illuminae.  Like its predecessor, Gemina’s formatting plays an integral part in the story, and this is a cool looking ARC.  I plan to re-listen to Illuminae in audiobook format to refresh my memory before starting Gemina – the audiobook was fantastically well done and actually won an Audiie at this years Audie awards.  Go Team Illuminae!  Gemina was another of the hot books at BEA, with people starting to line up hours in advance of the ARC drop.  I was one of the last people in line to actually get one, and I was so happy.  You can pick it up for yourselves in October 2016.

One Paris Summer by Denise Grover Swank is a young adult contemporary about a young woman who spends a summer in France after her parents’ divorce and father’s remarriage.  I’m hoping it will be in a similar vein to Stephanie Perkins’ Anna and the French Kiss which I adored.  We shall see.  This book is available from June 2017.

Next up is The Comet Seekers by Helen Sedgwick.  I don’t know much about this one, but it appears to be a love story between an Irishwoman and a Frenchman in the setting of an Antarctic research base.  It appears they have been destined to be together since time immemorial, so colour me intrigued.  The Comet Seekers is available in October 2016.

The main reason I picked up Florence Foster Jenkins!!! The Life of the World’s Worst Opera Singer is because of the trailer for the upcoming movie starring Meryl Streep.  The trailer makes Florence sound such an engaging and fascinating character – I look forward to reading her story before seeing the movie.  Check it out from June 2016.

The Edge of Everything by Jeff Giles is a book about which I don’t know a great deal.  From the blurb it seems to be a YA thriller novel.  It was blurbed by Peter Jackson of The Lord of the Rings movies, so it does comes with high praise.  Thrillers aren’t generally my cup of tea though, but I’ll give it a go.  It is not available until January 2017.

Keith Donohue’s The Motion of Puppets drew my attention because the protagonist comes from Quebec.  This novel tells the story of a woman who is turned into a puppet and how she and her husband must struggle to be reunited.  It could be an interesting read.  Pick it up in October 2016.

One of the few middle grade books I picked up was The Secret Keepers by Trenton Lee Stewart.  Reuben finds a magical antique watch and as a result, is drawn into many fantastical adventures and must work to defeat the villainous Smoke.  Should be worth a read.  It’s around from September 2017.

The 13th Continuum is a young adult dystopian novel about a world in which humanity has had to retreat to havens known as Continuums after a cataclysmic event nearly destroys the Earth.  A group of young people has the opportunity to change their reality.  The sequel, Return of the Continuums was also available so I picked it up, too.  The 13th Continuum is already available – it was released in April 2016 – but you’ll need to wait til November 2016 for the sequel.

One of the ARC drops at BEA was a roll the dice game which indicated which book you won.  I ended up with Poisoned Blade by Kate Elliott, an author whose works I have very much enjoyed before.  Poisoned Blade is the sequel to Court of Fives, which I have not yet read, so I’d best get on it 🙂  The Poisoned Blade is available in August 2016.

Here I Am by Jonathan Safran Foer is the final book for this part of the haul.  I don’t know much about this one, but I’ve heard of the author’s previous works, so I’ll check it out.  You can read it from September 2016.