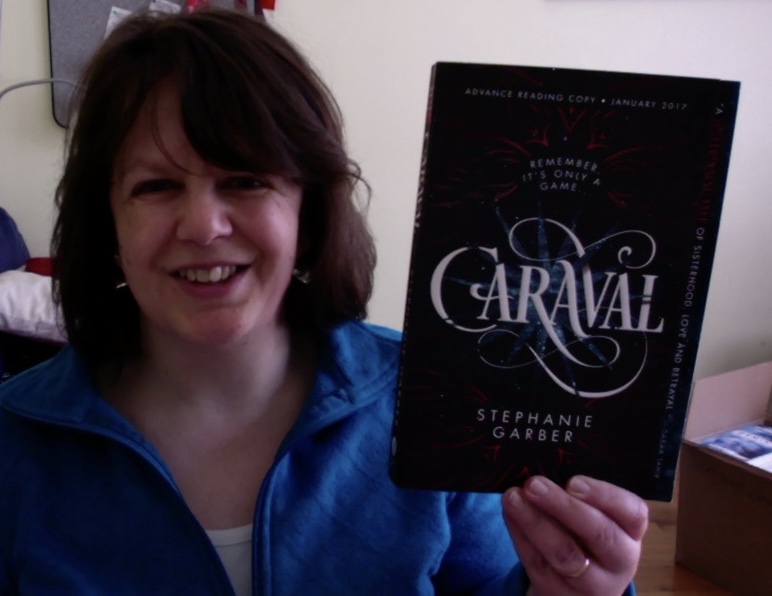 Hello, and welcome to the first of three posts detailing all the books I picked up at Book Expo in America last week.  It was a wonderful time and I picked up some amazing books.  There’s a lot to get through, so let’s get started.

Of the ARCs I picked up one of the ones I’m most excited about is Caraval by Stephanie Garber.  I was able to snag a ticket to get it signed about which I was very happy.  This is the first in a YA duology by a debut author, and it is certainly getting a lot of buzz.  The tagline for the book is Before you enter the world of Caraval, you must remember that it’s all a game . . .  This sounds really intriguing and it will be one of the first of the ARCs I picked up that I will read.  It is next on my list after finishing Maggie Stiefvater’s The Dream Thieves.  Caraval will be published in January 2017.

Another book I picked up was Aaron Safronoff’s Sunborn Rising: Beneath the Fall.  This is a YA fantasy book in which Barra and her two friends must work to prevent a blight of creeping vine from destroying the treescape world of Cerulean which is her home.  This is chock full of breathtaking images – one to read in hard copy rather than Kindle I think.  Sunburn Rising: Beneath the Fall will be published later this month in May 2016.

The Readers of Broken Wheel Recommend by Katarina Bivald is a contemporary novel the synopsis of which really spoke to me as a booklover.  It tells the story of Sara, a young woman from Sweden who travels to Broken Wheel, Iowa, to meet with her bookworm penal.  Sadly, on her arrival she finds that her friend has sadly passed away.  Instead of returning to Sweden, Sara decides to remain in Broken Wheel to open a bookshop.  Sounds like a winner to me!  This book hit shelves in January 2016.

As a speaker of both English and French, I was intrigued by When in French (Love in a  Second Language) by Lauren Collins.  This is a memoir detailing Collins’ romance with and marriage to a French speaker and aims to explore how much of our understanding of a different culture is related to language.  I am a native English speaker, married to an Anglophone,  but have lived in both France and Quebec. I am very interested to read of Collins’ take on the matter.  When in French Love in a Second Language is available in September 2016.

Scholastic Audiobooks were also giving out cards to download samples of some of their upcoming books.  These include Maggie Stiefvater’s The Raven King, and Everland by Wendy Spinale.  Being an audiobook aficionada, I will definitely be checking these out.

When I saw the title Women Who (Still) Love Cats Too Much I couldn’t resist.  This is a cartoon book by Allia Zobel Nolan and cartoons by Nicole Hollander and I had a nice chat about, what else, cats, when meeting them at BEA.  This book is already available – it was released in September 2015.

Unfortunately, not all the books at BEA were full copies – some were only samplers.  Two of these are very highly anticipated – Leigh Bardugo’s Crooked Kingdom (the sequel to Six of Crows) and Carve the Mark, the latest novel by Divergent’s Veronica Roth.  I picked them up anyway, although sometimes a sneak peek can be so frustrating if you want more.

Another of the books I was most anticipating from BEA was Sabaa Tahir’s A Torch Against the Night.  This is a sequel to the YA fantasy book An Ember in the Ashes, which I very much enjoyed.  I am anticipating reading about the further adventures of Laia and Elias.  You can pick this up starting in August 2016.

One book with an especially eye-catching cover is The Graces by Laure Eve.  This is a young adult fantasy about three siblings who are witches.  I don’t know much more about it, but it promises to be intriguing.  Check it out in September 2016.

Another book about witches – is that a theme this year? – is Labyrinth Lost by Zoraida Cordova.  It’s about an unwilling witch who tries to rid herself of magic, but the spell backfires.  We shall see what it’s about.  Labyrinth Lost is available in September 2016.

All is Not Forgotten by Wendy Walker is unusual in that they also provided an advanced copy of the audiobook, read by Dylan Baker.  It’s difficult to pinpoint what the book is about – the publicity seems to be focussing on the fact that Reese Witherspoon has bought the film rights.  I guess I’ll find out in due course!  You can find out for yourselves from July 2016.

That’s all I have for today.  More book haul posts to follow!  Let me know if you’re excited about any of these books.