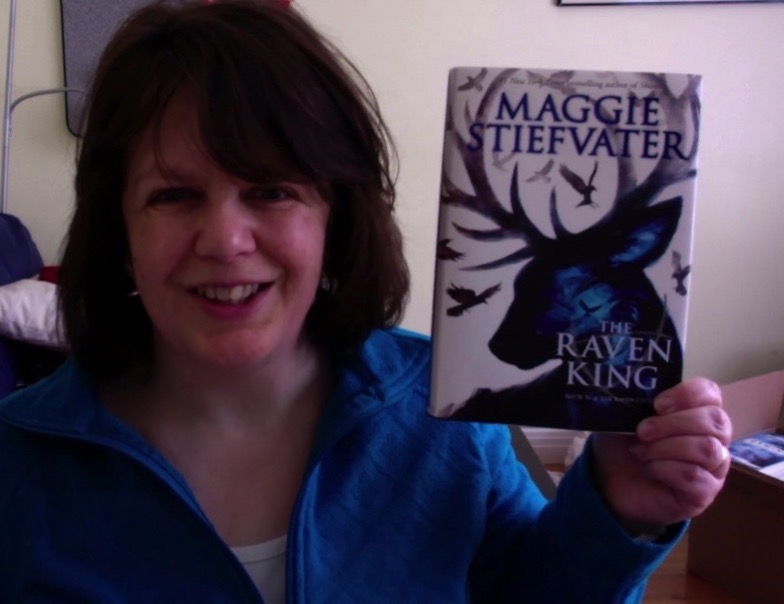 Here we go for the third and final post in my BEA 2016 book haul series.  Thank you for sticking with me.

The first book I’d like to talk about, and the obtaining of which was one of my highlights of BEA is Maggie Stiefvater’s The Raven King.  This is the fourth and final volume in the The Raven Cycle of which I have read 1.95 books.  (I’m just finishing off The Dream Thieves.)  I loved having the opportunity to meet Maggie and discuss book hangovers with her, and she has said her aim with The Raven King is to leave her readers with the book hangover to end all book hangovers, so I can’t wait!  The Raven King has already been published.

Next up is First Blood by Elly Blake.  This was another of the ARCs available in a roll the dice game.  This is a YA fantasy about a young woman who has fire magic which is a challenge when living in a kingdom controlled by frostbloods, with ice magic.  It sounds intriguing and I look forward to reading it.  First Blood will be released in January 2017.

The Hundred Lies of Lizzie Lovett is a YA mystery, but I don’t know much more than that.  I’ll certainly give it a go. It will be released in January 2017.

Stealing Snow by Danielle Paige was one of my must-have books from BEA and I was lucky enough to snag a copy – yay me!  I’ve really been enjoying Paige’s retelling of the Wizard of Oz in her Dorothy Must Die series so I am highly anticipating reading this Snow Queen reworking.  Stealing Snow will be released in September 2016.

While waiting inline for a signing, one kind person offered me a spare copy of Rainbow Rowell’s Kindred Spirits.  This is a short novella of whose existence I was unaware.  It’s about a girl who LOVES Star Wars and the people she meets while waiting in line to see the latest movie.  I adore Rowell’s writing so this will be a pleasure to read.  This book came out in February 2016.

One of the more beautifully presented ARCs of BEA 2016 was Lauren Oliver’s Replica.  It came in a plastic box closed with velcro and the ARC itself is double sided – the same story is told from two different perspectives, so you flip the book one way to read Gemma’s story, the other for Lyra’s.  Replica will be published in October 2016.

News of the World’s Amazon blurb says the following:  In the aftermath of the Civil War, an aging itinerant news reader agrees to transport a young captive of the Kiowa back to her people in this exquisitely rendered, morally complex, multilayered novel of historical fiction from the author of Enemy Women that explores the boundaries of family, responsibility, honor, and trust.  Should be an interesting read.  This book will also be published in October 2016.

I hope you’ve enjoyed this journey through my BEA 2016 book haul.  As well as a shedload of wonderful books to read I have many happy memories of my trip to Chicago.  Roll on BEA 2017!