I've had my hands on the Kobo Glo for a few days now, and it is a very nice device. I took some pictures to compare it with my Kobo Touch and Kindle Touch. 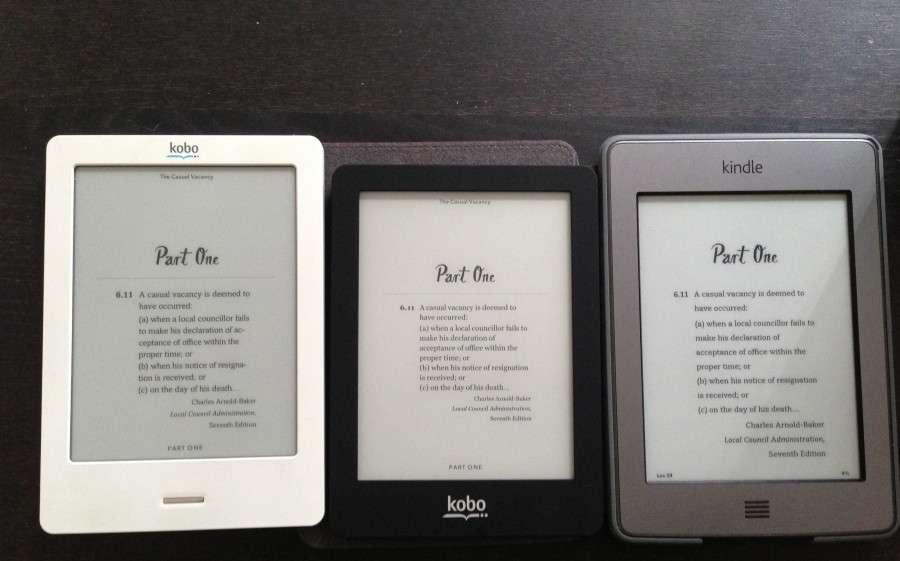 You may notice from the images that the Kobo Glo has dropped the physical home button. Personally, I'd have preferred that they keep it. Access to the Home screen is now via on-screen menus.

The Kobo Glo comes with a slightly updated UI, which, according to the forums, and my own experience, is still rather buggy. Once or twice I noticed that the device got stuck on a page and I had to turn it off to get back to reading. I imagine a firmware update will be coming soon to fix this. It's annoying, but not a deal breaker for me.

The big selling point of the Glo is of course the in-built lighting. "Comfort light" as Kobo markets it. Here is an image of the Kobo Touch vs the Kobo Glo with the screen lit 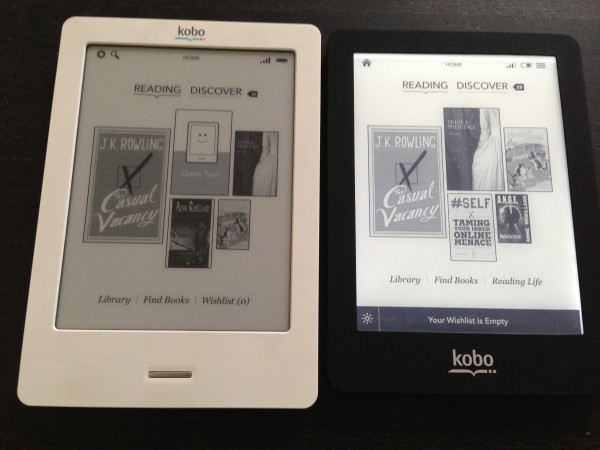 On my device at least the light is not perfectly evenly distributed. There is shadowing at the bottom of the screen. Kobo has quite cleverly got around this by reversing the menu bar at the bottom so it is white on black to disguise that somewhat. I understand from the forums that some people find the shadowing too irritating. My own feeling is that it doesn't bother me at all, and that the Comfort Light is a great improvement over book lights or less than ideal ambient lighting.

One thing on which I am undecided – whether or not to leave the Glo light on in all lighting conditions. Amazon recommends that you do so on their Paperwhite, whereas Kobo suggests only when you need it. In any case I've had it on a lot and noticed no significant drain on battery power.

All in all the Kobo Glo is a great upgrade to the Kobo line. If you're buying a first Kobo, the extra $30 for the Kobo Glo over the Kobo Touch is worth the expense in my opinion. Of course, as an entry level ereader, for $79 you can also get the Kobo Mini which looks so cute. If you already have a Touch and are thinking of upgrading that's probably more a case of personal preference. If you read a lot in less than ideal lighting conditions it might be a great purchase for you.