I use GoodReads as my book tracking application of choice.  I read primarily on my Kindle and since Amazon bought GoodReads the integration works really well.  Let me share the image that captures my main statistics: 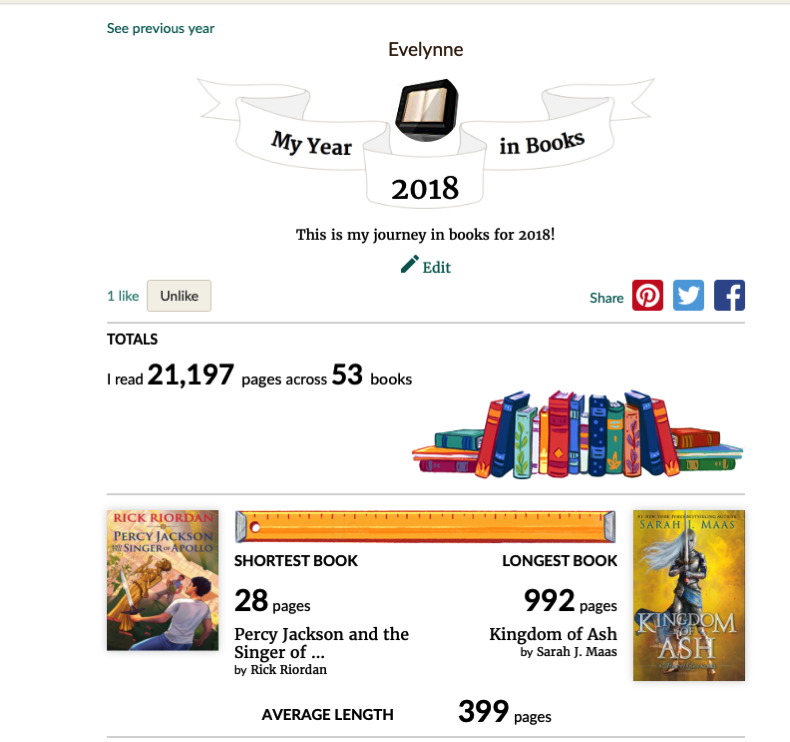 As you can see, in 2018 I read 53 books, which beat my GoodReads challenge of 45 books – yay!  The shortest book I read was Percy Jackson and the Singer of Apollo at only 28 pages and the longest was Kingdom of Ash at 992 pages.  I’ll be honest; this has not been my greatest reading year. It is the lowest book count since 2010 when I started tracking my reading on GoodReads and nowhere near my record of 117 books that I read in 2013.  Admittedly, 2013 was boosted considerably by my tendency to listen to audiobooks to keep me awake during my long nightshifts.

Additionally, there are not so many books I read this year that blew me away.  I was actually struggling to find enough to fit in a top 5.  It was rare this year to find a book that had me sneaking a quick read at my Kindle during breaks and commutes.  Can you say reading slump?  A fair number of the books I read were also non fiction to prepare myself for my promotion to management this year.  See: increased responsibilities.

Nevertheless, here are some books that rocked my world in 2018.

Book of Life Trilogy + Time’s Convert by Deborah Harkness.  I’m grouping these as one plus the followup book as I marathoned all of these in November 2018.  I remember I tried to read the first book a couple of years ago and couldn’t get into it at all.  I tried again this year and couldn’t put it down.  While I didn’t love the characters and their relationship, I LOVED the world building and the historical basis for Harkness’s world.  I simply ate them all up.  It helped of course that Sky UK made a wonderful TV adaptation (which I caught on UK iTunes) starring Matthew Goode and Teresa Palmer plus an excellent supporting cast.  Those of you who have to wait for the Stateside release of the show are in for a real treat.

I’m aware that the follow on novel, Time’s Convert, had mixed reviews, but again I loved it.  The contrast between Marcus’s experiences in the 1800s and Phoebe’s modern day experience was so very well done.

Queen of Air and Darkness by Cassandra Clare.  I admit I had some reservations awaiting this book.  It is the conclusion to Clare’s Dark Artifices series and I had been very unhappy with how she closed off her Mortal Instruments series.  While QoA&D is not quite as satisfying as Clockwork Princess, the conclusion to The Infernal Devices, I felt Clare did an excellent job at servicing her characters and closing off plot lines. The hook at the end made me really excited for the next series, The Wicked Powers.

Children of Blood and Bone by Tomi Adeyemi.  Yes, I know I came to the party late with this one, having only read it this month.  I must admit I was a little unsure as it was marketed as predominantly based on African mythology; being of European descent I am more used to stories based on European folklore.  Often with new authors or books I’m not sure about I will check out a sample from Amazon or Audible.  In this case when I read the sample I was immediately hooked.  I loved the characters, the world and the magic system.  I particularly enjoyed that some of the characters were written in shades of grey.  It was not clear which way they’d go. I’d thoroughly recommend this one and can’t wait for the sequel.

Grim Lovelies by Megan Shepherd This one had me at transfigured animals in modern day Paris. Again I loved the setting, the characters and the magic system. Shepherd also makes use of an old cliche of a timer running down but it worked incredibly well here.  I can’t wait to read the sequel.

Vox by Christina Dalcher  This is one of the few non YA non fantasy books to top my list this year.  Having loved the adaptation of Margaret Attwood’s Handmaid’s Tale, I was intrigued by this novel which describes a world in which women’s voices are restricted, literally and figuratively by a word counter.  It wasn’t always an easy read, given the world in which we are living, but it was fascinating to see how it was developed and the impact the lack of voice had on society.

Most anticipated releases of 2019

Here, in no particular order, are five books I’m anxiously anticipating in 2019.

Courting Darkness by Robin LaFevers,  This is the first in a new duology (duologies really are the new trilogies!) and is a followup to the marvellous His Fair Assassin trilogy.  This centres around an order of assassin nuns and is such a fun read – I am looking forward to seeing how the story continues.  Courting Darkness will be released on February 5th 2019.

The Ruin of Kings by Jenn Lyons.  This is the first in a new epic fantasy series.  I must admit I was a little concerned about committing to a new epic fantasy series.  I’m already following Brandon Sanderson’s Stormlight Archive, and I’m not sure how many books Lyons is anticipating in her series.  However, Tor.com is releasing a couple of chapters a week along with commentary from the inimitable Leigh Butler.  I’ve been following along and really enjoying Lyons’ witty, engaging prose and characters.  I look forward to reading it when it hits shelves and Kindles on February 5th 2019.

Holy Sister by Mark Lawrence.  This is the finale to Lawrence’s Book of the Ancestor coincidentally also about warrior nuns.  Are they also a thing now?  Lawrence’s finale to The Broken Empire is one of of my all-time favourite series conclusions so if he can do the same for this one I’ll be very very happy.  Holy Sister is released on April 9th 2019.

The Testaments by Margaret Attwood.  After decades, Attwood is finally publishing a sequel to The Handmaid’s Tale!  I am sooooo excited to read this.  I imagine Attwood’s decision to write and publish this now is due to the success of the TV adaptation and also the changes in the world in which we live.  This sequel takes place 15 years after the ending of the first book, which is a very smart move; that way it won’t contradict the narrative of the TV series.  I’ll definitely be queuing up to read this when it is released on September 10th 2019.

So there you have it; my reading year and my most anticipated reads for 2019.  How did they compare with yours?  Let me know in the comments.